2 Quarters full skins. As shown below. 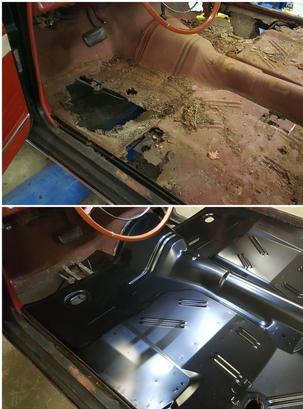 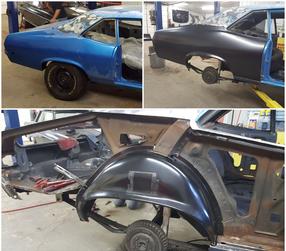 From Concourse To Modified

How We Got Started

It all started in Chicago in the early 1940's. but fast forward to the late 60's and that's where Sr. comes into the picture. Dan Sr. has been working on cars since your now muscle car was brand new off the dealer lot. Growing up in Chicago his father and grandfather had a small repair shop on Grand Ave. Where Sr. spent most his days after school working on cars. As a kid then Danny now Sr. would drive down to Nickey Chevrolet and Spalding Dodge to pick up parts. Everyday dealerships back in the day but now are some of the most commonly know dealers of Chicago. Nickey Chevy creating the "Nickey Camaro". As the years went on Danny Jr. has now entered the auto Industry. After Graduating top in his class from CLC he had a desire to work on old cars and to bring them back to life. Several years after graduation and one night in the family shop he had thrown an idea past Sr. "Let's build that 1969 Impala convertible for mecum auctions. Now this is by no means the first car they have built but was the first that had the intentions on taking to auction. Well before it was able to be listed for auction in late January they had a buyer which was a very close friend of President Bush. Talk about a cool feeling. Now it was time to buy another car which ended up being a 1969 Chevy Nova. That Nova turned into 2 then into 4 & 8 & 16. You get the picture. At this time customers and people at car shows were calling us the Nova Kings. Now we already had a business name Antique Cruisers Inc. A short time later Midwest Nova Kings was Born. What was a passion was now a growing breathing entity that was full speed ahead. Dan Jr had the vision to build high quality Nova's that were better than the factory and more friendly to drive with power and reliability. The Antique Cruisers / Midwest Nova Kings team developed  a simply custom car order plan. Just like buying a New Corvette today.

That was it. Your car was able to be Hand built in as little as 4 weeks start to finish or longer for those who needed payment time.

All car's would get full skins and outer wheelhouses as a must. Sheet metal was done so that no one would know that it was ever fixed. PRIDE was put into these cars. Every nut and bolt was removed off the car. No exceptions. We needed to see every spot on the car. All suspension parts were brand new, complete new interiors. These cars had a Bumper to Bumper Warranty. As long as oil was in the engine when it had an issue, then it was fully covered.

Wow who else had the courage to put a bumper to bumper warranty on a 45 year old car. We believed and still believe in every car or part that we sell.

In closing what was once a dream that was developing itself into a full time job is now a family business. Dan Jr has developed the business into a part specialist service. He and his crew travel the country searching for cars and barns that have been holding parts for years. You may be paying a little more but what your getting is a crew spending 77 hours in a truck in just 6 days searching and picking up that one part you cannot find. We are not a junk yard that just waits for grandmas old rust bucket to come in. All the parts are documented and stored indoors in a new fully remodeled shop with 24hr surveillance and fire alarms to protect these parts that we all cherish and cannot be replaced.

Today we stock over 27,000 Used muscle car parts from all walks of life. Chevy II, Nova, Camaro, Chevelle, GTO, Lemans, Mustang, Coronet, Cuda, Charger and so on....
And we sell every major company's reproduction parts to high performance engines.

What's the difference???   We only sell what we use on our cars. NOT ALL PARTS ARE CREATED EQUILE. We give honest part reviews. If we don't like the way it fits we tell you so that you are aware of what your getting. Not some ten dollar an hour guy who build one car in his backyard and says "Oh Ya it fits great". Only to find out it fits like Crap. Now you have to deal with a return and most importantly LOST TIME. Call us and see what we have to say.